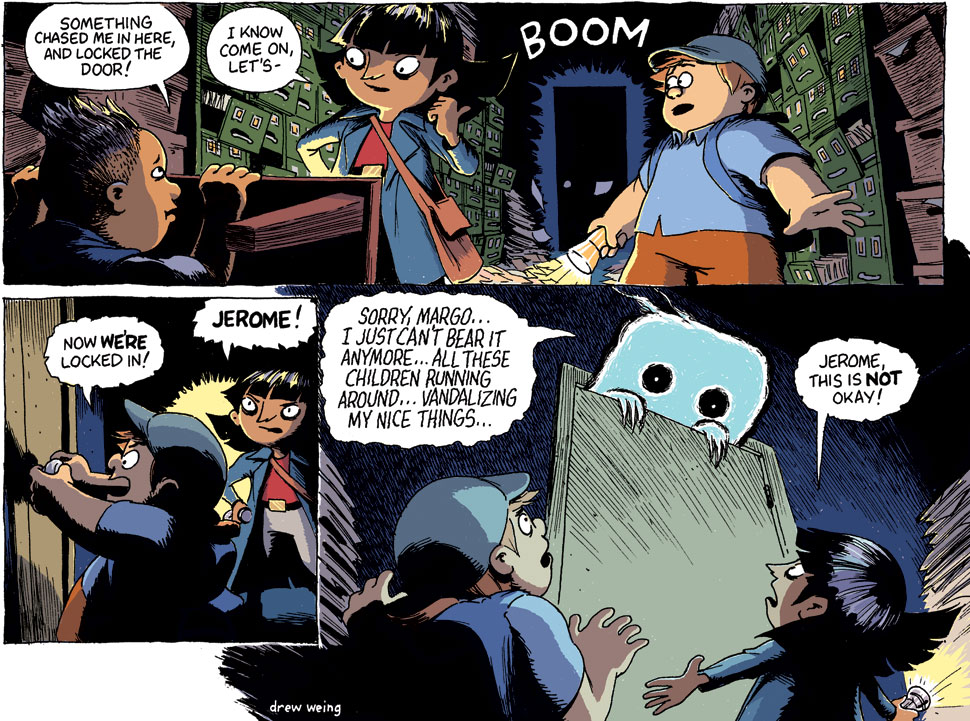 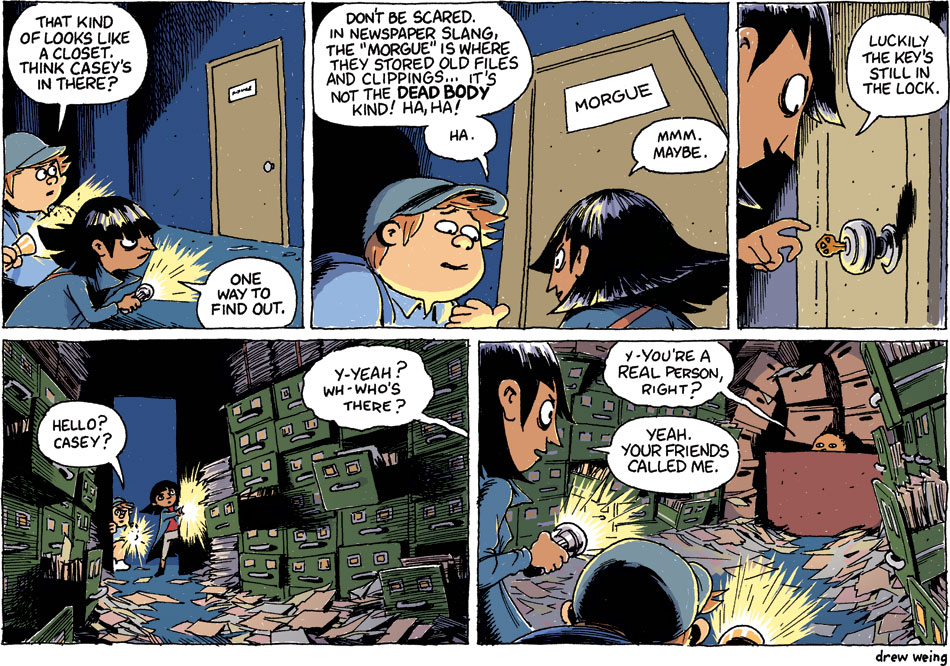 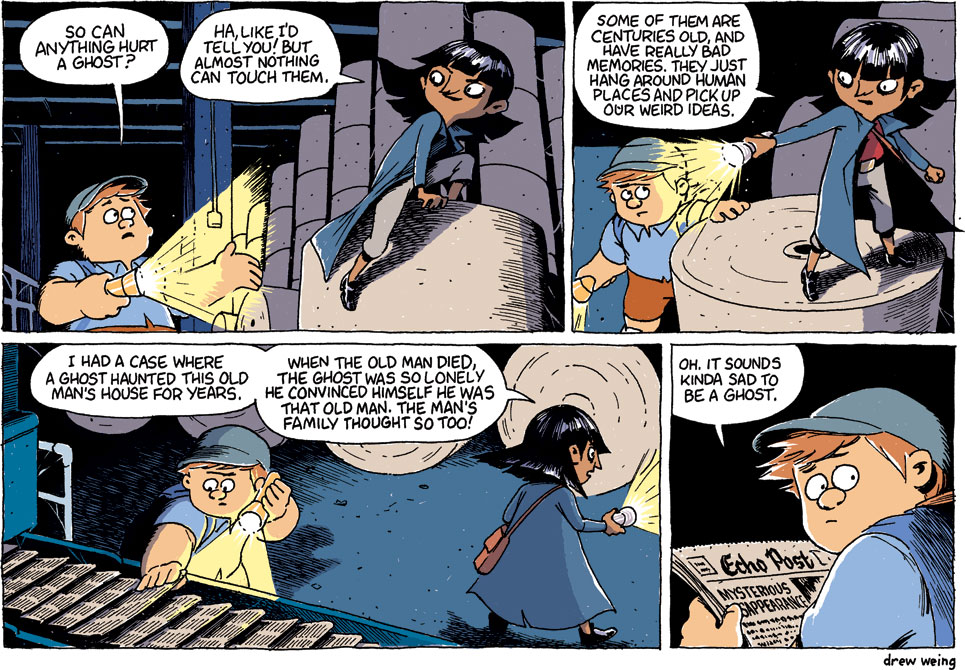 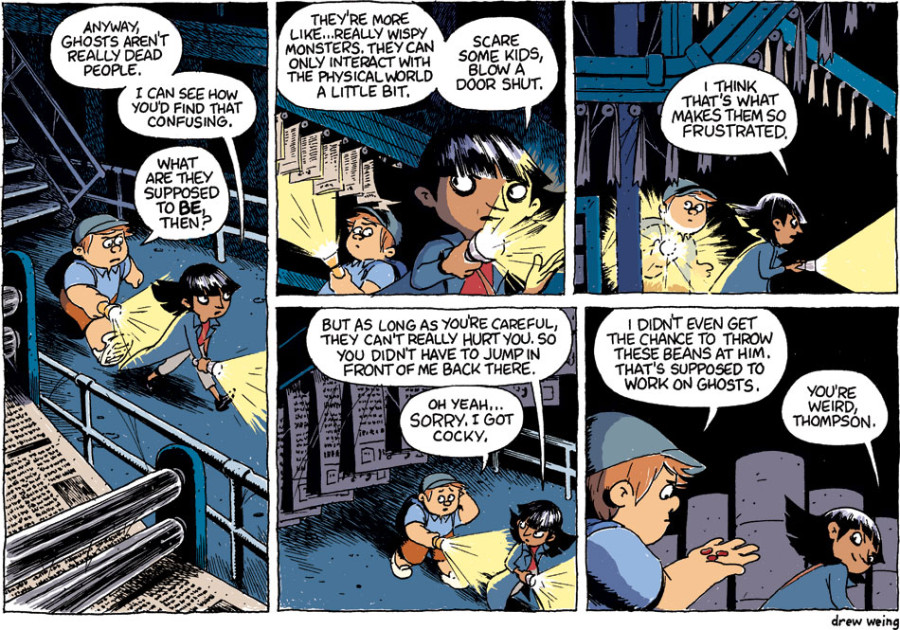 I put a new minicomic up in the Little House shop. It’s an anthology of comics about monsters, called Bezoar. Eleanor and I each have a short comic in it, and there’s several other stories by awesome artists (and friends) Patrick Dean, Joey Weiser, Michele Chidester, and David Mack, who edited the whole thing and drew the awesome cover.

Eleanor and I tried something interesting for this comic – we each picked a monster that the other person had already created, and wrote a story featuring that monster. Then I drew the story she wrote, and she drew mine. Here’s a page from my story:

About to head off to France! Please stop by any of the signing spots if you’re in the vicinity.

One note before I go – we’re going to let our PO Box lapse at the end of the month, since we have a more permanent address now. So don’t send anything there! If you need our new address, please contact me: weing.drew@gmail.com

I just got the signing schedule for my French sojourn!

2011 was an exciting year in many ways (we bought a house!) but it wasn’t good for my productivity. Let’s get 2012 off to a better start!

Did you know that a French edition of Set to Sea came out? The French title is “En Mer,” out now from Editions Ca et La. I did all the new lettering and sound effects, so it should be a pretty good translation.

My lovely French publishers are flying me out to the Angouleme festival this year! I’ll be signing books both there and at several bookstores in Paris and elsewhere. I’m pretty thrilled – more details to come. I’ll also be signing this limited-edition print at Paris art shop Sergeant Paper.

It’s quite large, over 27 inches tall. The beasties are labelled in Latin, and most were culled from 16th century natural histories (Conrad Gesner, Ambroise Pare). It’s very immature to chuckle over such imaginative conceptions as the “sea monk” or the “marine pig,” let’s have some historical perspective about these things.

We’re packing up to move to our new house, and I discovered a cache of Journal Comic minis hiding in our closet! And I still have a decent chunk of unsold original strips! What to do with them? Let’s have a blowout moving sale!

Get an original strip of your choice and a randomly selected vintage, collectible, highly-sought-after TJC minicomic for $20, with free shipping to anywhere in the US! Overseas, only $25!

Click on over to see what strips are still available!

• Eleanor and I are moving in about a month – we decided to buy a house, for some reason! It’s a smallish place, but nice – it’s got enough space for us each to have our own studio, so that will be a change (our current setup being somewhat like a particle accelerator – us constantly bouncing into each other, with interesting results). Also, a big joined kitchen/ living room, for our bougie foodie pretensions. New York and Portland will abide; we’re officially settled in Athens for the foreseeable future! We’re going to paint it some crazy colors, it’ll be great.

• There’s nothing like moving to make you recalculate exactly how much you want to own physical things (like CDs, for instance. I can’t wait to get CDs out of my life.) I might have a “moving funds” sale for some of our extra graphic novels and assorted bric-a-brac soon.

• Penn State and the PA Center for the Book flew me up to accept the Lynd Ward Honor and give a short talk about my personal history with comics. Here’s the video, complete with closeups of embarrassing childhood rip-off superhero drawings. My part starts about 9 minutes in.

• Set to Sea will finally be back in print in late July. The long wait has been aggravating, but as has been pointed out to me, selling out is never bad. I received a copy of the 2nd printing a few days ago, and it’s quite snazzy – it has yellow endpapers, and a couple of small printing mistakes (the kind no one has noticed but me) have been fixed. Yellow endpapers!

• The Serbian edition of Set to Sea, from Komiko, is out! I just got some comp copies in the mail.

The printing is actually slightly larger than the Fantagraphics edition, thus larger than the original art, even. It still looks good, though – and care was taken with editing in new cyrillic sound effects, which pleases me.

• And I just finished hand-lettering a French edition, which will be coming out this August, from Editions çà et là. The French-speaking comics market is large and sophisticated, so I hope the book gets a good reception!